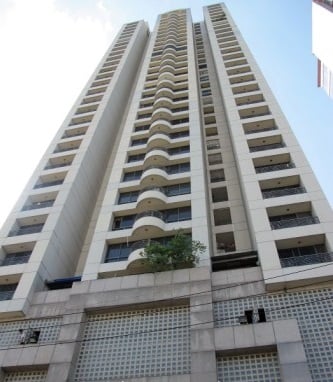 One Beverly Place By Megaworld

One Beverly Place, San Juan is an iconic 32-story luxury residential tower located on 35 Annapolis Street in Greenhills Manila. This location is close to some of the best institutions which include top universities, international banks, business establishments, and medical centers.

The development was designed by W.V. Coscolluela & Associates, one of the top architects in the region. As a matter of fact, this architect has been involved in more than 23 other high-profile projects in the country.
The building is a landmark in concrete and glass with a well decorated entrance hall. Most of the units here are designed with large windows and elegant patios which give you a glimpse of the serene Wack Wack Golf Course. The recorded height of One Beverly Place, San Juan is 115 meters above ground.

Even though the entire building is currently fully owned with no available unit for sale, there are units for leasing and renting. Generally, One Beverly Place is a condominium skyscraper with one, two, and three-bedroom units. Just to give you an idea, a three-bedroom house has a floor area measuring 183 square meters and 4 bathrooms. In terms of rent, it fetches 55,000 pesos a month.

The area is well developed and this development is in between Greenhills Mansion and Intrawest Building. The developer, Megaworld which was founded in August 24, 1989 put up this building as its first project in 1989 before it was publicly listed. In all their developments, the company emphasizes on creating spaces where people can live, work, play, learn, and shop. It is not a mere coincidence that Megaworld is the largest residential condominium developer, landlord, and office provider in Philippines.

Apart from this project, the portfolio of Megaworld shows lots of other completed projected in different cities in Philippines such as Quezon, Pasay, Makati, Mactan, Manila, Mandaluyong, and Paranaque. In terms of land ownership, Megaworld has more than 244 hectares of prime land in areas considered as key growth locations.

Whether you are a local looking for a place to call home in San Juan or an expatriate working in Manila and looking for a place to invest or stay, One Beverly Place is open to all those possibilities. San Juan City is highly urbanized and located right at the center of Metro Manila. Because of its attractiveness, the city has grown to a population of slightly over 120,000 people according to the 2015 census.

The elevation of the area is approximately 17 meters above sea level and this makes it safe from flooding events which is a huge plus if you are planning to own property in One Beverly Place. In terms of living costs, this area is one of the least expensive cities in Philippines. Again, from here, you can link to some of the best places in Philippines such as Quezon City which lies to the north, the City of Manila which is to the west, and Mandaluyong to the south.

Another aspect that makes One Beverly Place, San Juan a strategic real estate investment is the transport infrastructure that is well laid out. Apart from the main highways, there are lots of other feeder roads branching off. This makes accessibility to this location extremely easy irrespective of where you are coming from. One of the main highways to the right is EDSA which is a circumferential highway going around Manila. In length, it means around 23.8 kilometers and connects 6 of the regions that form the Capital of Manila.

The other notable road infrastructure worth mentioning is the Ortigas Avenue. In length, this measures 15.5 kilometers and connects the western part of Rizal Province and the eastern part of Metro Manila. It is classified among the busiest highways in Metropolitan Manila.

In addition to the road infrastructure, there is the rail transport system. The city of San Juan is served by the LRT-2 rail network. Living in One Beverly Place gives you easy access to the J. Ruiz station. There are other secondary routes such as N. Domingo which head to Quezon City. Therefore, whether you want to use the buses and jeepneys or the rail transport system, the choice is yours.

One Beverly Place, San Juan is that ideal place which opens up and gives you direct access to so many other places in Philippines and even the rest of the world. As you would expect, living here gives you the benefit of the luxuries of the city and the comfort of a secure place packed with amenities.

Megaworld One Beverly Place in San Juan City, Philippines is a premier Condo project available for sale. If you're looking to rent or purchase One Beverly Place, then check here first. We have full details of One Beverly Place updated regularly as well as everything you need to know about the availing and booking process, broken down into stages that includes selecting a unit, choosing a payment plan and buying your dream home at the right price. For price list, free site tripping or showroom visit, personalized service, model house, unit plans, floor plans, payment terms, CHAT LIVE with an agent 24x7. Always only buy from PRC licensed Real Estate Brokers and Agents.